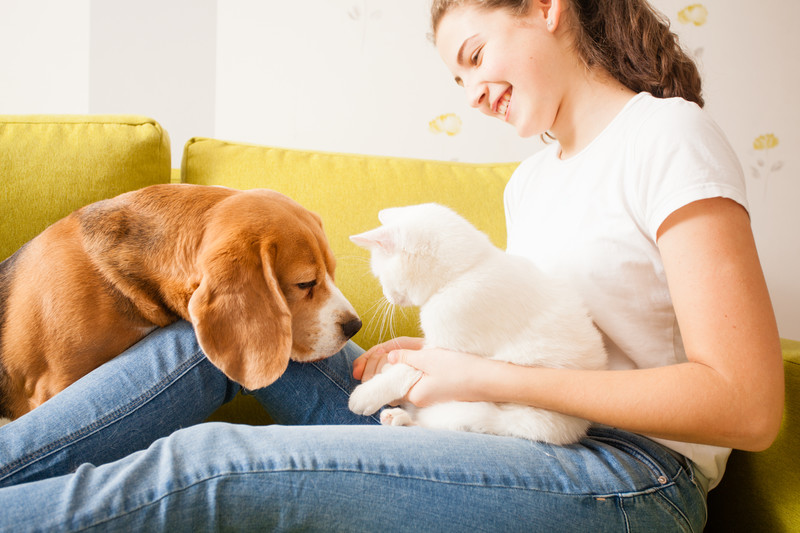 Thinking about getting a dog? Leading pet behaviourist and dog trainer COLIN TENNANT has lots of practical advice to help introduce a dog into a cat’s home smoothly.

A life of cats and dogs.

The image of a dog chasing a cat often brings great mirth to a casual observer — perhaps I should add the canine observer! Yet cats and dogs can be great friends — the secret is in the introduction and in training a puppy properly. If handled incorrectly the initial introduction can destroy what could potentially be a harmonious cat/dog relationship.

I have just completed the habituation of my German Shepherd Puppy Dieter to ten-year-old Lillie who is a former rescue cat and very timid. Unfortunately for Lillie, my occupation means I need to own dogs and so she has to get along with them. By the time Dieter, who is now 20 months old, was three months of age, he was fine with her, although Lillie was slower to accept him. It was very rewarding for me recently to find Lillie, my Cairn Terrier Safie and Dieter fast asleep on a beanbag bed together.

Fortunately, thousands of cats and dogs get on very well and often become good friends because their owners handled the introduction well and made the right choice in the breed of dog in terms of temperament.

I’m going to explore how we can help habituate a new puppy to a feline household and look at what breeds are more likely to fit into the household of an established cat or cats.

A great deal will ultimately depend on the temperament of your cat. Cats that are of a very fearful disposition, which is often the case with rescue cats, will react adversely to any dog they see or meet and so are probably best left without a canine companion.

The dog and cat’s mind

Both species are born predators and their prey instinct naturally kicks in when animals run before them. Few cats stand up to dogs, especially when a cat has been used to being the only occupant of the house — the cats flight response triggers they can’t cope with a dogs size and determination. Cats brought up with dogs seem more robust and will often fight back. Puppies, like kittens, are curious creatures and investigate any movements that catch their eye.

Cats, unlike dogs, are not very forgiving. First impressions do last!

A cat as a lone predator has to be in perfect health and can’t afford damage because if it can’t hunt through injury it will die. A dog as a pack member can still survive if it can’t hunt (if injured) because the other pack members supply its food until it mends. Therefore, the cat’s instinct is to avoid confrontation hence its reaction to a dog.

You stand a much better chance of integrating a dog into your household if you have a calm cat who’s not flighty or timorous, and picking a breed of dog that is more likely to fit into your house is a much easier task.

My choice of breeds comes from what I have seen and observed over 30 years, although I do realise that exceptions to the rule are possible. Terriers like Cairns or Westies tend to be highly reactive to movement and the sudden ‘rush’ of a cat perhaps jumping up and onto a chair, can prompt a puppy to bark.

It is possible for a puppy’s behaviour to be conditioned and shaped favourably with a resident cat — as per my own example of Lillie and Dieter.

The dog is a pack animal and therefore more naturally predisposed to accepting the cat than the other way round.

All puppies arrive with innate survival behaviours and prey catching is a big one. When a puppy sees a cat for the first time he’ll investigate it then attempt to initiate play or test the object of his curiosity to ascertain what it is.

If the cat runs, which most do, then the chase is on. Before too long the cat begins to fear the puppy, although the puppy will love the cat — for the wrong reasons!

Puppies find it fascinating that a cat can often be on a high perch above them and inaccessible. This will usually prompt barking and excited yapping due to the dog’s frustration at not being able to reach his ‘friend’. At this point the poor cat has further evidence that this new bundle of torment appears to be a monster. Some cats even leave home at this point, so beware.

I can only generalize about suitable breeds because individual dogs can be very good with cats, especially when the cat is already established in the home. The scent hounds (Beagles for example) are less highly triggered and therefore less reactive; conversely the sight hounds (greyhounds) are very driven to chase behaviour should be avoided.

The critical factor is the first half-dozen meetings between your cat and new puppy. Do it wrong and cats can be most unforgiving, fearful or downright aggressive.

When introducing a puppy to a cat one should never just plonk the puppy down and see what happens. Cats are loners and conversely dogs pack animals which means that the dog is more likely to accept the cat.

I use a lead and collar on the puppy for controlling any burst of enthusiasm when investigating the cat. It is essential that the puppy is on a lead of some type.

Puppies are normally kept in the kitchen area of a house for the first few months for house training purposes, so this allows the cat to inspect and retreat at will. After about a week, I suggest you place the cat in a cat carrier on a table or other inaccessible place out of reach of the puppy two or three times daily for about 15 minutes at a time so the two get used to each other’s scents and presence. If the puppy barks too much, distract him with dog treats or toys. It’s a good idea to practise the same introduction process at feeding time so the puppy is hungry and can easily be distracted with food.

An alternative is to use an indoor puppy cage so that when the puppy is safely confined, the cat can freely use the room as he has before and investigate the puppy without physical contact. This is a good way to habituate the two pets on a daily basis.

A week or so later, and if the cat is reasonably calm, put the puppy on a lead and allow him to meet the cat. You are aiming to induce familiarity with control so don’t try and encourage play. The cat may sniff, walk off, or jump on a chair — don’t force him near the puppy under any circumstances. On the whole, it’s a case of encouraging the cat with the odd titbit and distracting the puppy from trying to use the cat as a playmate. This is called habituation pet training.

If the first ten or so meetings have no ‘fight or flight’ associations the cat will begin to relax and his flight or fight instinct will subside. This means he’s adapting and the puppy’s excitement will decrease accordingly. Over time the cat will accept and may even enjoy the companion or at least tolerate him and ignore or avoid when possible until the puppy reaches adulthood.

Though most adapt in about six months, I have found that it can take up to a year for the cat and dog to reach an equilibrium of trust and then anything can happen including them becoming the best of friends, even sleeping together. They sometimes play and I’ve known cats deliberately initiate games.

Top tips for introducing a dog into a cat’s home